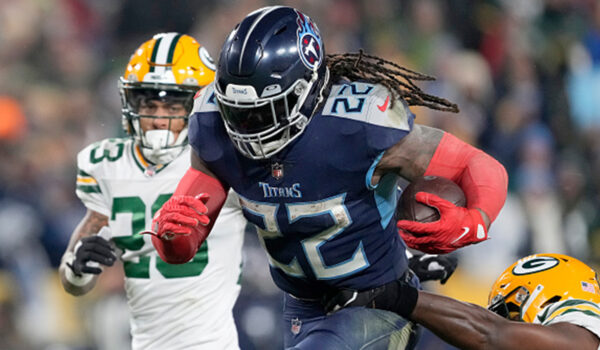 The Tennessee Titans continue their strong season as they defeat the Green Bay Packers in Week 11's Thursday Night Football to progress to 7-3 in the AFC South.

The Titans leaned heavily on their reliable run game to take this Week 11 victory, as Derrick Henry continued to dominate on the ground.

Henry had 87 rushing yards and one touchdown on the night, while also logging 45 yards through the air. The Pack may have managed to stop King Henry once at the goal line, but otherwise their defense couldn't handle the 6'3 bulldozer.

Meanwhile, Green Bay couldn't really get anything going on the ground, with just 56 total rushing yards split between their two running backs Aaron Jones and AJ Dillon. Nothing was added to their highlight reels last night...

While the Packers were stuck trying to slow down Derrick Henry, Ryan Tannehill was able to throw for 333 yards and two touchdowns, out-duelling Aaron Rodgers at Lambeau Field.

Tannehill led the way with Treylon Burks, who amassed 111 yards from 7 receptions, while Robert Woods served as a reliable second - logging 69 yards on the night.

Aaron Rodgers had a pretty good night all things considered... Right up until the fourth quarter, when the Titans held Green Bay to 2 punt, 2 turnovers-on-downs and 0 points, despite Tannehill throwing an interception to Rasul Douglas at the 40-yard line.

When Rodgers did find his success, it usually had Christian Watson on the receiving end, who put up two scores in this Week 11 matchup.

The classic combo connected for 73 yards on 6 targets, including this strike over the middle of the field.

Rodgers didn't have a bad night per se, but with the Pack out-thrown 337-227, it's not surprising who walked away with the win...

First up was Aaron Rodgers passing touchdown to Christian Watson for his first touchdown of the night. Rodgers hurried the line for a quick snap to get an illegal 12th man call on Tennessee as their substitutes ran to the sideline.

Derrick Henry also got in on the action, as he featured heavily in 3rd and 4th down conversions - including this direct snap while Tannehill distracted the defense. This conversion allowed Tennessee to take a 14-6 lead heading into the half with a Henry touchdown run from the 4-yard line.

Once again, the fear of Derrick Henry's rushing abilities allowed even more trickery to come into play.

To respond to a Packers field goal drive that opened up the second half, the Titans took the ball down to the goal line and all eyes were on Henry, who was expected to be a battering ram into the end zone... as usual.

Instead, Henry took a hand-off and popped up from the 3-yard line to throw a jump pass to Austin Hooper for the touchdown. Sneaky stuff.

Sneaky football has been the theme of Thursday night 😏#TENvsGB on Prime Video
Also available on NFL+ https://t.co/BPNa9Cbtld pic.twitter.com/kGJyC6TJ9w

The Packers defense struggled to stop Tennessee in any capacity on Thursday night (minus one interception late in the game). Meanwhile the Titans defense really found their feet in the fourth quarter, allowing 0 points from Rodgers and Co.

All things considered; this was a pretty even matchup. The biggest difference is the Titans' unstoppable run game and a Packers' offense that was stunted in the second half.

Derrick Henry is a problem for any team, but when you get distracted by his talents, things will really open up for Tannehill through the air.

After losing their first two games, Tennessee have now won 7 of their last 8 matchups taking them to 7-3 on the season. They now have a multiple game lead as the top the AFC south and look stronger than ever Tannehill seems fully recovered from his ankle injury.

The Packers on the other hand, have fallen to 4-7 and now have little hope of catching the Minnesota Vikings in the NFC North. It's clear that Green Bay have a talented side, but they aren't looking like the complete, well-rounded team that they once were.

So, a victory for Tennessee kicks off Week 11 of the 2022 NFL season, while Green Bay's troubling season continues.

Join me on Monday as I recap all of this Sunday's matchups. If you missed last week's recap, and want to hear me complain about Russel Wilson, then click here. But, I'll probably be doing the same thing next week, as the Broncos-Raiders matchup could be some of the worst football we've seen all year...