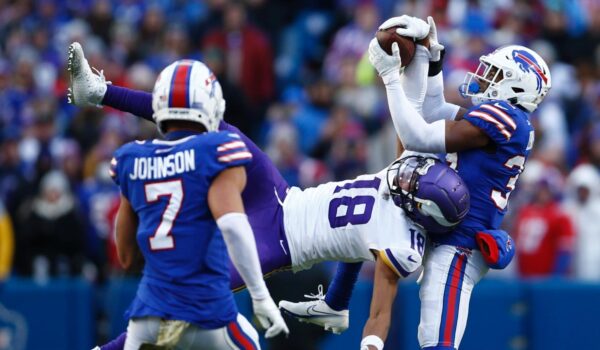 Justin Jefferson headlines Week 10 as he makes countless highlight-reel plays in the greatest show of football this year. But don't worry, there's plenty of lowlights too, so you'll still see a lot of my usual ranting...

Up until their meeting in Munich, the Bucs were worst in the league with an average of 60.7 rushing yards per game. But finally, some good scheming from Bruce Aryans allowed Rashad White to take advantage of Seattle's 27th-ranked run defense.

White logged a career-high 105 yards on 22 carries, leading a run game that picked up 10 of the Bucs 26 first downs. He even gave us his best Derrick Henry impression at one point.

Success on the ground also opened up the passing game for Tom Brady, who threw 22/29 for 258 yards and 2 touchdowns to become the first player to win in four different countries. Will he ever stop breaking records?

I'll admit the Bucs played great, but they definitely got too big for their boots... Let's keep Brady in the backfield from now on, shall we?

Justin Fields continues his hot-streak as a dual-threat QB, but as usual, one superstar is not enough to win games.

Now, I know I say this every week and unfortunately, the Bears continues to prove me right. Justin Fields is one of the greatest running quarterbacks we've seen, I mean he's really up there with Lamar, but... It. Just. Doesn't. Win. Games.

Until the Bears find a way to get things going through the air and on the ground (by actually handing the ball to a running back), they'll continue taking some tough losses.

This will never stop being entertaining, but it's a shame it's all they have...

I don't even want to mention Jared Goff being vaguely good while Matt Stafford sits on the bench in LA... Don't talk to me about Detroit.

For anyone who was questioning Tua - you can stop now.

Tua Tagovailoa has thrown 10 touchdowns and 0 interceptions to lead Miami to their best start since 2001. The Fins now have a four-game win streak and their ability to make a deep playoff run is no longer in question, it's just whether Tua can stay healthy enough to take them there.

Drafting this guy ahead of Justin Herbert may pay off to be one of the best decisions in history.

Now, the Browns had me last week. I mean, I really thought they were onto something with a very comfortable win over the Joe Burrow & Co. But no. They're back to being the Browns. Same old, same old for Cleveland.

Denver sacrificed their entire future for Russel Wilson, just for him to lead the worst-scoring offense in the NFL.

The Seahawks legend has thrown one or fewer touchdowns in 7 of his 8 starts this year. Now, I know Brett Rypien isn't exactly the Tom Brady of back-up QBs, but for the love of football let's give him a shot.

Westbrook-Ikhine stole the spotlight for Tennessee this weekend - logging 119 yards and 2 touchdowns on 5 catches. With Derrick Henry limited to just 2.8 yards per carry, someone needed to step up in the passing game, and Ryan Tannehill chose his targets well, even if it did come with some trickery...

IT'S A TITANS FLEA FLICKER 😱

This one was too crazy to even begin to explain. So, before I let you watch exactly what happened, the only thing I'll say is that Justin Jefferson is the best receiver in the league. No question.

He is the biggest reason Minnesota got the win - making some of the greatest catches you'll ever see at some of the most important times. I'm locking in my vote for offensive player of the year already.

yeah I paid for twitter and im getting my money's worth

I guess an Eagles-Vikings matchup in the playoffs could just about top this one, so long as Kirk Cousins doesn't have to play in primetime.

The Giants are off to their best start since 2008 and it's all thanks to Saquon Barkley.

The Big Blue RB clocked 152 yards and a touchdown from a whopping 35 carries to lead a dominant ground game. It seems New York are going to run Barkley until the wheels fall off, and who wouldn't?

Meanwhile, Dan Jones is now the first Giants QB to go six straight starts with no interceptions since Phil Simms in the early 90s. Jones' ability to protect the ball in tough situations could take the Giants a long way.

Darius Slayton takes it all the way for the 54 yard touchdown! 🔥pic.twitter.com/NPFfyNNheq

Meanwhile, the Texans are as boring as they've been all season. The 7-loss team are now 0-6 when Davis Mills throws a pick... so I know what my money's on next week.

The Jags may have pulled out all their tricks in Kansas City, but the Chiefs are the Chiefs... Even if you manage to steal his opening possession, Patrick Mahomes will still throw 331 yards and 4 touchdowns on your defense.

The Andy Reid scheme leaves receivers so wide open, they can literally hop into the endzone on one leg.

Kadarius Toney hops his way in for his first career touchdown! #ChiefsKingdom @0fficialC2N

Why is Dennis Allen still putting his faith in Andy Dalton? I mean, I'm not saying that Jameis Winston is any better. But the Saints offense is so tragic, that putting Taysom Hill in the backfield for non-stop QB runs could honestly be their best option... (It is)

And even worse than their QB struggle, is New Orleans' terrible use of one of the best running backs in the league - Alvin Kamara. I mean, 8 carries all game...? Don't be shocked to see AK in some new colours next year.

Meanwhile, Kenny Pickett had an okay game through the air, but Najee Harris was the difference maker in this matchup - banking 99 yards as the Steelers out-rushed the Saints 217-to-29.

Best run of Najee Harris career. Where has this been? pic.twitter.com/QLvLuN2PuW

The Raiders continue their streak of disappointment as they blow yet another lead and go to 2-7. They are now 0-6 in one-possession games and the only team to give up at least 20 points in every game this season... Derrick Carr is right to be mad.

On the other hand, Jonathan Taylor looks like he's finally healthy enough to lead the Colts offense. After missing multiple games with an ankle injury, and having limited participation in other matchups, last year's leading rusher looked like himself again - logging 147 yards and a touchdown in the win.

The run game was so dominant that even old man Matt Ryan got involved.

With both teams sporting their back-up QBs, the Rams were exposed for what they really are... Nothing without Stafford and Kupp.

Los Angeles' showed off their dismal ground game once again, as go-to running backs - Cam Akers and Darrell Henderson - managed just 43 yards, while John Wolford was forced to do as much of the heavy lifting as he could. (Which wasn't much after Cooper Kupp left the field with an injury)

Conner clocked 69 rushing yards and two touchdowns, as McCoy threw 26/37 for 238 yards and a score. McCoy hooked up with Cardinals' favourite Deandre Hopkins, who caught 10 catches for 98 yards to lead Arizona's air raid.

Mike McCarthy puts this overtime loss down to penalties, and not the fact he went for it on fourth-and-4 within field goal range. The decision handed Green Bay the win, who took just 6 plays before hitting an easy chip shot...

In any case, this game proved that Russel Wilson is indeed the laughingstock of legendary QBs that are still out there slinging. While both Rodgers and Brady showed that they have some vintage moments left in the tank, Wilson can't get out of his downward spiral. I'm calling for retirement...

Now, this matchup was pretty even all things considered. The only difference I can spot is Dak throwing 2 INTs while Rodgers committed 0 turnovers, and of course some questionable play calling for Dallas. Tough loss either way.

Dak second INT of the half 😨

They may have lost, but Dak getting the ball in OT secured the last 25 yards I needed to land an 80/1 parlay. Thank the God of coin flips! This win joins last week's 116/1 bet to bring our total payout to £519 from just £6 wagered!

Not that it was going to be difficult, but the 49ers have figured out what to do with Christain McCaffrey, Elijah Mitchell and Deebo Samuel... Give them the ball.

San Francisco put their ground game to the test this Sunday and came out on top after out-rushing LA 156-to-51.

Who doesn't love to see this guy in the end zone?

Christian McCaffrey rushes for a TD to give the 49ers the lead!

Hot on the tails of Seattle, San Fran has a real shot at making a run for 1st place, especially if Seattle continue stumbling. If the 49ers can use their upcoming stretch of home games to their advantage, we could see a change in the AFC West.

So, we're almost through Week 10 of the 2022 NFL season and it's now very clear which teams will and won't be making a playoff run.

Join me tomorrow as I recap Washington's multi-score loss to the Eagles. (Yes, I'm that confident in Hurts & Co.)

(Edit: I put my money where my mouth is and lost £5. What happened? 1 reception and 7 yards for AJ Brown, while McLaurin clocked 128? I guess Heinicke magic is still alive and well.)