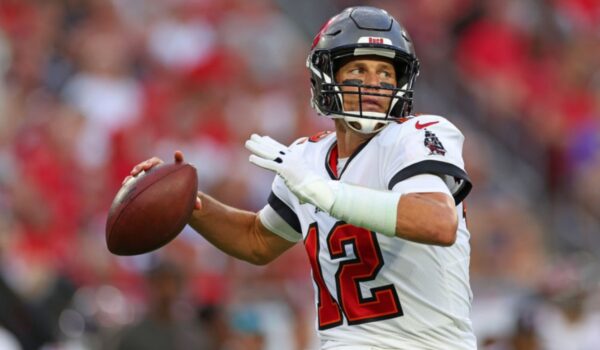 Despite a rocky start to the 2022 season with the Tampa Bay Buccaneers, legendary quarterback Tom Brady continues to go where no quarterback has gone before.

The latest landmark on his long list of accomplishments came with a 15-yard pass to running back Leonard Fournette during the fourth quarter.

Another milestone for Tom Brady.

It's been a rough season in Tampa for the undisputed GOAT, but he still has some vintage moments left in the tank, as he led an NFL-record 55th game-winning touchdown drive in just 35 seconds in the fourth quarter of Sunday's game in LA.

We always have a chance with [Brady] We're grateful to have him. He got over 100,000 yards; that's a long playing career for anybody. He's still playing at a high level. We love the guy to death. You run out of things to say about him. I'm sure I can't say anything different than the 50 million people that [have] already commented things on him. He's a great player. He's one of the best, if not the best, to ever play the game, and he continues to do that.

The 45-year old quarterback conceded that nobody would have thought he'd reach the monumental milestone when he entered the NFL as a sixth-round draft pick in 2000, let alone winning seven super bowls.

Despite the doubt he received as a rookie, Brady is well clear of anyone else in the legendary cohort. And with the rest of the top 5 already retired, it'll be a very long time before anyone breaks this record - if they ever do.

Quarterbacks with Most Passing Yards in NFL History:

Brady commented on the accomplishment by giving thanks to all the players that helped him get there.

For me, it’s a credit to all the guys that I’ve played with, who have blocked for me, have caught passes. ... I can’t do (anything) in this league without guys doing what they’re amazing at, too... They’re great achievements. But as much as people want to say: 'Oh, this is what Tom Brady did.’ In my mind, this is what myself and all these other people that have contributed to my life have done as well.

So, all credit to running back Leonard Fournette for taking the Tampa Bay Buccaneers quarterback over the 100,000 line, but record-breaking is nothing new for Brady.

Just last season, Tom Brady became the first player to throw 600 touchdowns, but also set a not-so-glamorous record a few games ago by becoming the most-sacked QB of all time.

Brady owes most of his yards in Tampa to his favourite target Mike Evans, who leads the team in receiving yards at 617 on the season and continues to be the Bucs most reliable wide-out. Evans commented on how important the victory was, as it broke a rare three-game losing streak for the team.

Winning is the best thing in this league because it's so hard -- especially against a good team like that. We're all happy. ... It was a tough three-game stretch -- games that we definitely could have won and we just couldn't get it done, for whatever the reason was. But we came back, fought hard tonight and got a much-needed win.

Brady shows no signs of stopping, so who knows just how high his numbers will go...?