The life and legacy of Vince Lombardi 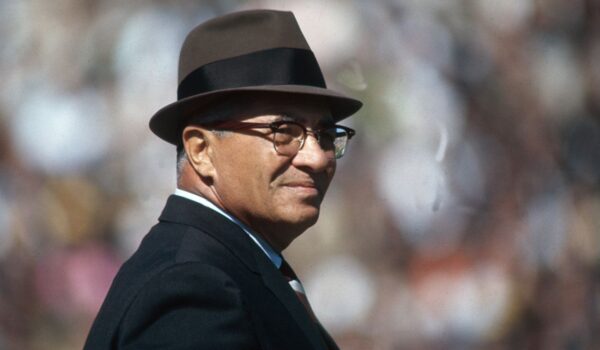 Vince Lombardi (born Vincent Thomas Lombardi) is widely regarded as one of the greatest football coaches in the history of the National Football League (NFL). He was head coach and general manager of the Green Bay Packers during the 1960’s, leading them to five National Football League championships including the first two Super Bowls. Following his sudden death in 1970 from colon cancer, the Super Bowl trophy was renamed in his honour.

Vince Lombardi was born in Brooklyn, New York, on June 11, 1913, to Italian immigrants. He was the oldest of five children and grew up in a highly religious, Catholic household. By the time he was 15 years old, Lombardi was studying to become a priest at the Cathedral College of Immaculate Conception.

Deciding on a different career path two years later, Lombardi transferred to St. Francis Preparatory High School in Queens where he was the fullback on the football team. Lombardi accepted a football scholarship after finishing high school at Fordham University in the Bronx, where he was considered one of the ‘Seven Blocks of Granite.' He graduated college in 1937 with a degree in business.

After college, Lombardi was between jobs as the United States were still battling the economic effects of the Great Depression. In 1938, he enrolled in Fordham Law School and played football semi-professionally with the Wilmington Clippers. Lombardi dropped out after one semester.

By 1939, Lombardi was a teacher at St. Cecilia High School in Englewood, New Jersey, and an assistant coach for the school's basketball, football, and baseball teams. He worked there for eight years, becoming head coach in 1942. During his time working for the school, Lombardi married Marie Planitz. They had two children together, named Susan and Vince Jr. Lombardi went back to Fordham University in 1947 to coach the freshman football and basketball teams.

Lombardi’s professional football coaching career did not begin until 1954, after being the coach for the United States Military Academy’s varsity defensive line for two years. Lombardi took the job as offensive coordinator for the NFL’s New York Giants and led them to five winning seasons. In his five years working with the Giants, it only took the team three years to become a championship team.

The role of assistant coach soon was not enough for Lombardi. In 1959, he became the general manager and head coach for the Green Bay Packers. It was a huge challenge for Lombardi, as during the last season the Packers had only won one game. Thanks to Lombardi’s relentless coaching style, where he demanded obedience and dedication from all players, the Packers soon were an unmovable, dominant force in the NFL throughout the 1960's. The NFL team won six divisional titles, five NFL championships, and the first two Super Bowls.

Following the NFL season of 1967, Lombardi stepped down as head coach for the Green Bay Packers but remained their general manager for one more year. One year away from coaching was more than enough for Lombardi, and in 1969 he became head coach for the Washington Redskins. The Redskins earned their first winning season in over ten years.

Vince Lombardi died suddenly on September 3, 1970 at 57 years old, after being diagnosed with an aggressive form of colon cancer only ten weeks before. To commemorate his legacy, Lombardi was inducted in the Pro Football Hall of Fame in 1971.

The ‘World Championship Game Trophy’, otherwise known as the Super Bowl trophy, was renamed after Lombardi passed. The trophy is awarded to the team who wins the NFL championship game and it is made entirely of sterling silver. It weighs 7 pounds and is 22 inches high. Tiffany & Co produced the original trophy, which cost $50,000 and took four months and 72 hours to complete. Since 1970, the trophy has been known as the ‘Vince Lombardi Trophy.’