The Biggest Sports Brawls Ever 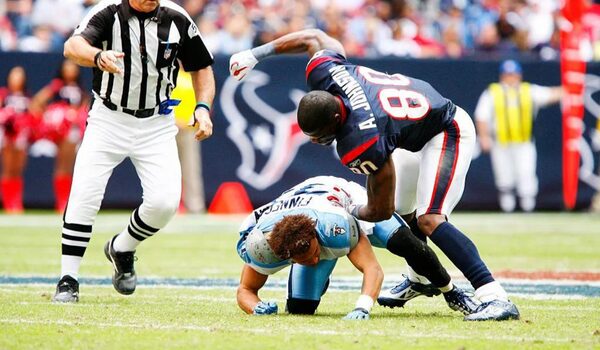 Sports are very competitive and can often lead to tension between rivalries.

Sometimes this tension can boil over and start a huge brawl between the two, whether it's a whole team or single players.

Sports brawls can be entertaining but sometimes at an expense! We have composed a list of the biggest brawls in sports history.

With Tottenham just 3 points away from winning the Premier League, they faced their London Rivals Chelsea, who would do whatever they could to stop them from being the champions.

With lots of foul play, came lots of pressure and tension between the teams. There was lots of shoving and pushing and frustration was building and fights started to break out, With Mousa Dembele scratching Diego Costa in the face, getting him sent off.

Costa decided to keep things hostile by grabbing Kyle Walker's Legs, and lots of other fouls from both sides.

At the end of the game, things were heated but no fights broke out.

Looking for retribution From the beginning of Game 6 of the 1996 Western Conference Finals, Avalanche right winger Claude Lemieux knocked Red Wings centre, Kris Draper, into the boards, this seemed exciting for Detroit throughout.

By the second period, everyone was involved in a fight, even the goalies were fighting each other. There was a total of 39 penalties and a crazy amount of brawls throughout, it's a must-watch!

In 1998, rivals Miami Heat and NY Knick once again met in the playoffs, with lots of tension this time round.

Alonzo Mourning of Miami and Larry Johnson of the Knicks got into a fight late in the game, and both benches, including Knicks coach Jeff Van Gundy, stormed the floor.

Although there were no actual fights, both teams displayed feistiness, and one particularly noteworthy episode occurred, and it was certainly entertaining to watch.

During a game at the Knicks stadium, there was a lot of hostility between JR Smith and Nate Robinson, but the most notable was when Smith tackled Robinson into the photographers after Robinson threw a punch at him.

Not too long after Carmelo Anthony decides to hit mardy Collins with a right hook in which he falls to the floor, Jared Jefferies then decides to chase him while Melo skips away.

Seven of the players were suspended without pay for a combined total of 47 games.

Pacers vs Pistons vs Fans

Also known as ‘Malice at the palace’, a fight broke out at the Pistons stadium in 2004.

Known for being easily angered, Ron Artest was able to control his emotions after being pushed by Ben Wallace, who had been fouled by Artest. But what tipped him over the edge was when a fan threw a beer at him, which led to him jumping into the crowd and attacking the fan.

Artists teammates Jermaine O’Neal and Stephen Jackson were quick to head into the crowd to break up the fight, but this eventually led to them also getting involved. A fan then leaped into the court and started another fight with the rest throwing bottles.

The game was eventually canceled after a lengthy fight and it will certainly go down in NBA history.

Odor was having non of it when he shoved and landed a right hook on Bautista, knocking both his helmet and sunglasses. This ultimately led to a huge brawl between the teams.

During a game against the Houston Texans, rivals Tennesse Titans cornerback Courtland Finnegan decided to wind up Andre Johnson which eventually led to him getting a beat down.

The result of the game ended up 0-20 with the Texans taking the lead, a pretty shocking result.

It seems that there is a common occurrence for these two rivals to brew up a brawl, this time round Pedro Martinez was desperate to fight someone.

Martinez decided to throw a ball at Karim Garcia's back, supposedly on purpose.

This led to high tension between the two teams and later on Manny Ramierez steps in as pitcher and throws a high ball at Martinez, which he assumed was meant to hit him. Martinez didn't like this so he starts yelling which causes a fight.

72 year old Don Zimmer decides to get involved and go over to Martinez who slams him to the ground!