The Best Prop Picks for NFL Playoffs: Divisional Round 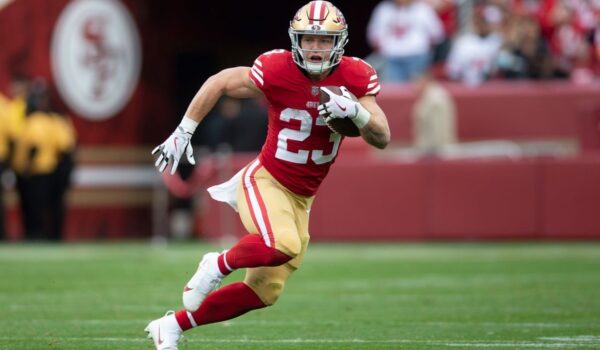 The 2023 Super Bowl is fast approaching, with the top 8 teams set to battle it out in the NFL Divisional Round this weekend.

For any of the avid NFL bettors, you'll soon be out of opportunities to give the sportsbooks a run for their money. But so long as football is still being played, we'll do our best to analyse all the data and list the best prop bet picks that could beat the odds.

So, without further ado, here are our favourite Player Prop bets for the 2023 NFL Divisional Round.

Despite Trevor Lawrence throwing 4 interceptions in the first half last weekend, Zay Jones still managed to rack up the catches - logging 8 receptions for 74 yards and a touchdown.

The most important thing to note though, is the fact that Jones had 13 targets on the night. With the Jacksonville Jaguars trailing for most of the game, Lawrence had to look to the air and hold off on the run game with Etienne, which meant a lot of targets for his receivers. And as the Chargers looked to lock down Christian Kirk and Evan Engram, Lawrence turned to Jones to move the sticks.

I'm predicting a similar story in their Divisional Round matchup with the Chiefs.

Now, I don't expect this game to be as much of a blowout as the odds suggest (KC: -455), but I am still calling a comfortable win for the Kansas City Chiefs. With that being said, I think the Over Rushing Attempts for Isiah Pacheco is a solid bet this weekend.

The Chiefs should take a good lead heading into the second half and with the Jags not-so-solid run defense, expect KC to drain the clock in the fourth quarter pretty easily - Pacheco will feature heavily here.

The New York Giants have put their QB to the test recently, with Jones averaging 85 yards on the ground in his last two games, including 78 yards rushing on Wild Card Weekend. On the flipside, Philly have allowed 121 rushing yards per game this season, so I'm expecting Dan Jones to take up a big chunk of that.

As the Eagles defense focuses on shutting down Saquon Barkley, Brian Daboll should use this to his advantage and sneak Dan Jones out for a few long runs if they can get the Birds to over-commit at the line of scrimmage (LOS). Betting on both the over yards and attempts could be a good shout here.

The Philadelphia Eagles averaged over 4 sacks per game in the 2022 regular season. Now, given that I'm expecting them to shut down the Giants' less-than-average receivers, Dan Jones will be feeling the pressure in the pocket this weekend. More importantly, if Daboll does put the ball in Jones' hands for some QB runs, expect Philly's frontline to catch onto a few and stop him before he can get out of the pocket or beyond the LOS.

If all goes to plan, Haason Reddick will appear in the sack column.

Philly quarterback Jalen Hurts has been an MVP candidate all year long and despite many touting him to be more of a running back than a QB, Hurts has hit the 10th spot for passing yards this season.

The line for this player prop bet sits right on his average (246.1) and with the Eagles as heavy favourites, expect Hurts to hit well beyond his average performance.

If you're a fan of parlays, it could be a good shout to combine this with the Over Receiving Yards bet for DeVonta Smith and/or A.J. Brown. If Hurts is throwing well this weekend, expect both of his star receivers to be on the receiving end of some deep shots.

Chase has averaged over 8 catches and 12 targets in his past 7 games. With Cincy's run game receiving less attention in recent weeks, expect Joe Burrow to come out the gate slinging it to his favourite receiver.

More importantly, Buffalo will be a tough opponent for the Bengals in their Division Round matchup, so we could see Burrow forced to throw a lot in the second half if they are chasing a deficit.

There are few people more reliable in reaching the end zone than Christian McCaffrey.

He has scored at least one touchdown in all of his last 7 games and I expect that the San Francisco 49ers vs Dallas Cowboys matchup will be no different.

If there's an NFL Player Prop that appears every single week in most of my parlays, it's a McCaffrey touchdown. You'd have to be very unlucky to see No.23 fall short of the end zone this weekend, especially with the Cowboys mediocre rush defense.

So, there you have it. My top NFL betting tips for this week's playoff games.

Let us know if you win any of your parlay or prop bets by tweeting at us here: BestSportsOdds (@BestSports_Odds) / Twitter