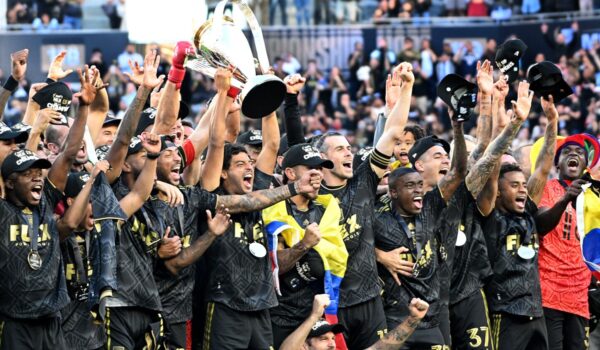 On Saturday the 5th of November, LAFC won the MLS for the first time ever in club history.

Philadelphia fans faced a tough weekend this week, losing 2 finals in just 2 days, we feel for you!

LAFC beat Philadelphia Union in the MLS cup final in a penalty shootout at Banc of California Stadium, thanks to hero Gareth Bale saving the day with the final goal with just a few minutes left.

While Bale maintained LAFC's hopes, the club also had another hero, the goalie, playing against his previous home team as a backup.

Both the journey to get to the final and the final itself were truly astonishing!

It wouldn’t be a Hollywood final if it wasn’t entertaining, and this game certainly was, it was everything you would want from a grande finale.

A free kick well outside the penalty area gave LAFC the early advantage, giving them a 1-0 lead in the 28th minute.

Carlos Vela, who scored from a free kick in the teams' previous meeting in March 2020, appeared set to take the relatively straightforward shot on Saturday, but LAFC had Kellyn Acosta waiting just to the side. He ended up taking the kick, with his shot slipping by a helpless Blake after bouncing off the forehead of a jumping Jack McGlynn and off the outside of a not so great wall.

Philadelphia Union quickly equalised when Dániel Gazdag scored from the penalty spot in the 59th minute to tie the score at 1-1.

Jess Murillo's header from a corner kick in the 83rd minute, which flew past Union goalie Andre Blake, broke the tie and put LAFC in a good position to win the game in 90 minutes.

“We've come a long way as a club… We've really grown and taken steps forward each and every year. The achievement of getting to your first MLS Cup, from this group, has been something that I'm incredibly proud of.”

Jack Elliott's header on a free kick that was given after LAFC's José Cifuentes was called for a foul in the box in the 85th minute giving Philadelphia another chance to draw the game, 2-2. The goal came from a deflection of Jesús Murillo’s head, giving goalie Andre Blake no chance of saving it.

After extra time, with the score still tied at 2-2, commotion broke out when LAFC goalie Maxime Crépeau collided with Cory Burke as he rushed out of the goal to stop a goal.

Crépeau was shown a yellow card, with the referee eventually changing his mind and giving him a red card. Crépeau was taken off due to the collision which had broken his leg.

After Elliott scored his second goal of the match from a corner kick in the 124th minute, the Union went on to win the tiebreaker.

This didn't last long when Gareth Bale scored a header from inside the box in the 128th minute, despite being 1 man down, resulting in penalty kicks.

Now it’s time to look forward for the World Cup later this year, with Gareth Bale’s home team Wales making it through the qualifying stage for the first time since 1958, although chances are unlikely, winning the MLS Cup and World Cup would be impressive.