History of the Super Bowl rings 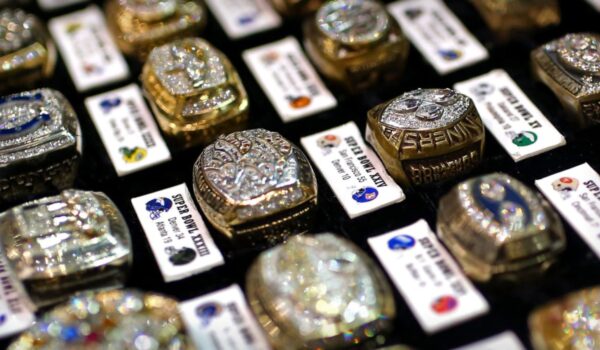 Super Bowl rings are awarded to the winning team members of the National Football League’s (NFL) annual championship, the Super Bowl. These rings serve as individual mementos of the team's victory, since there is only one Vince Lombardi Trophy.

After winning Super Bowl I in 1967, the Green Bay Packers were presented with the very first ring after defeating the Kansa City Chiefs. The ring was designed by Jostens and had 1 carat diamond. Jostens have designed the majority of the Super Bowl rings, creating 35 out of 53, but other designers include Tiffany & Co, Jason of Beverly Hills, and Balfour.

In comparison, the ring awarded to the Los Angeles Ram’s in 2022 had an impressive 20 carats of white diamonds that were set in yellow and white gold. The Ram’s beat the Cincinnati Bengals in Super Bowl LVI, only their second in the history of the NFL, and the team’s ring has the highest carat weight of any championship ring. The Super Bowl rings, based on the jewels alone, are reported to cost between $30,000 and $50,000 to manufacture.

The 20 carats are commemorative of the opening of the SoFi Stadium in 2020, the Ram’s home, and an additional 1.12 carats of diamonds signify the importance of the 12th January to the team. On this date in 2016, the Ram’s moved back to Los Angeles from St. Louis. Similarly, on the 12th January 2017 Sean McVay joined the Ram’s as their new head coach. In 2019, the NFL team won their first playoff game since their return to LA on this date.

The championship ring was designed by Jason of Beverly Hills and follows the design of the Super Bowl LV ring, won by the Tampa Bay Buccaneers, with a removable top. When the top of the ring is removed, a replica of the SoFi Stadium is revealed which incorporates turf that is taken from the stadium itself.

The ring that was awarded to the Pittsburgh Steelers during the Super Bowl XLIII is largely regarded as the best Super Bowl ring of all time.

The Steelers have won 6 Super Bowl championships, in 1975, 1976, 1979, 1980, 2006, and 2009. The ring has six giant diamonds, which is representative of these victories, and incorporates the NFL team’s helmet logo in the centre. These colours illustrate the materials which are used to manufacture steel: blue for steel scrap, yellow for coal, and orange for iron ore.

With so many rings created for so many players, it isn’t shocking that a few have been lost or sold over the decades.

John Schmitt, who won the Super Bowl III in 1969 when the New York Jets beat the Baltimore Colts, lost his ring while surfing. He wouldn’t be reunited with his ring until 40 years later. Schmitt’s ring was discovered by Cindy Saffery, the great niece of Waikiki lifeguard John Ernstberg who initially found the ring. Saffery took the ring to the jewellers to see if it was genuine, who were then able to get in contact with the Jet’s and forward the ring back to its original owner.

After the Super Bowl XVII in 1983, Washington Redskins winner Alvin Garrett decided that selling his ring could help fund his journey to becoming a minister. In 2016, the ring was returned to Garett with the diamonds missing.

Although the custom Super Bowl rings are not put into production until after the winner of the championship has been announced, there are still rumours about who will take home the Lombardi trophy in 2023.

The Kansas City Chiefs are the current favourites to win the Super Bowl LVII, followed by the Buffalo Bills.