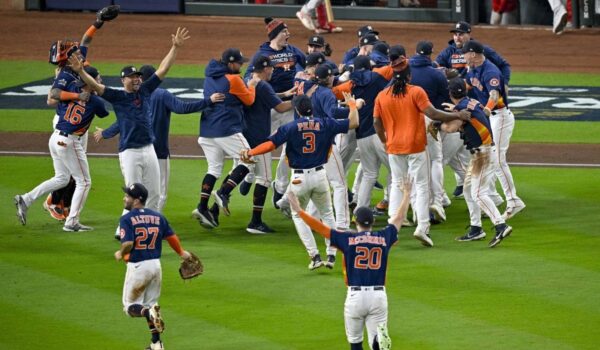 After a 5 year wait, the Astros have done it again!

The Astros' 2017 victory may have been marred by the team's sign-stealing incident, but this year's triumph will be untouchable.

The Houston Astros were crowned champions of the Major Leagues Baseball (MLB) World Series last night after beating the Philadelphia Phillies 4-1, in game 6 of the world series at Minute Maid Park.

This is the Astros second World Series Title, with the first in 2017 after defeating the Los Angeles Dodgers 4-3.

The Astros had advanced to the World Series four times in the previous 6 seasons, but in their previous 2 appearances—against the Nationals in 2019 and the Braves in 2018—they had been defeated by two inferior squads that weren't expected to as far. Although Valdez and Alvarez played amazingly throughout, a few newcomers also helped steal the show, including rookie Jeremy Peña, right-hander Cristian Javier, and Center fielder Chas McCormick.

“I knew it was going to happen sooner or later”

This was Dusty’s first World Series as manager of the Astros, after nearly 30 years of being at the club, who won it as a player in 1981 when playing for the LA Dodgers.

Following their 7-0 victory in Game 3 at Citizens Bank Park on Tuesday, the Phillies lead the series 2-1. Yet, the Astros won three straight games and another championship the next night after pitching the first combined no-hitter in World Series history.

With one of baseball's best curveballs and a sinking fastball that left the Phillies flailing for the majority of the night, left-hander Framber Valdez won his second game of this Series.

The Phillies' 1-0 lead in the sixth inning, temporarily gave rise to the notion that they may force a winner-take-all Game 7 on Sunday night with starting pitcher Zack Wheeler regaining his ace reputation following a rocky Game 2.

The Astros' most tenacious plate presence, rookie shortstop Jeremy Peña, pushed a single into centre field one out later.

After Phillies manager Rob Thomson pulled Zack Wheeler, the Astros quickly came back from being down 1-0, after Yordan Alvarez’s impressive 3 home runs.

You know, man... sometimes I win it, sometimes I take my hat off for the hitter. That’s the game.

Jeremy Peña did not only help the Astros win the world series, but he also came out with the World Series MVP title.

"It has a lot to do with my family, my upbringing," Pena said. "Shoutout to my teammates as well. They took me in since day one. They gave me the confidence to just go out and play my game."

Peña, 25, continued to show off the stellar defence that made him the first rookie shortstop to ever win a Gold Glove by going 2-for-4 with a run scored on Saturday.