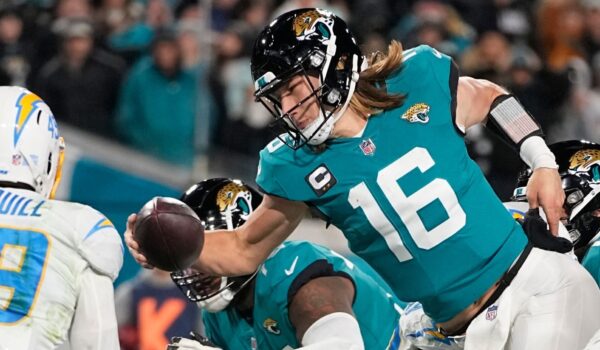 Brock Purdy, a comeback for the record books and maybe the end of a legacy, all highlight the Wild Card Round of the 2023 NFL playoffs. But there's plenty more to get into...

Brock Purdy threw for three touchdowns and ran in another as he starred on his first career playoff start to bring the 49ers to an 11-game win streak.

With a stubborn Seahawks side leading by a point at the break, Purdy led a dominant second half to outscore Seattle 25-6 - putting up 22 points in the space of 12 minutes at one point.

As always, Christian McCaffrey was a huge factor in this win, as he rushed for 119 yards and caught 2 passes for 17 more and a score.

68-yard run for Christian McCaffrey on his first playoff touch as a 49er 🤩 pic.twitter.com/XPgui9Y9F8

And in another shock surprise, Geno Smith has made his case for the starting spot in Seattle. Despite this Wild Card loss, Smith has done more with the Hawks offense than anybody ever expected. I'm looking forward to the Seahawks’ run next season.

The 49ers will now host Dallas for the Divisional Round matchup in San Fran.

This Jacksonville win was a spitting image of their regular season run...

Trevor Lawrence started the night by throwing 4 interceptions without scoring a single point, putting the Jags in a 27-0 deficit.

After finding the end zone right before the half, Lawrence came out of the locker to throw 3 more touchdowns and mount the third largest comeback in playoff history.

No.16 may have been crucial to the victory, but this call on 4th down deserves all the credit for setting up the walk off field goal. The 25-yard run by Travis Etienne gained perfect field position for Riley Patterson's 36-yard conversion as time expired.

The Jags will now visit the Kansas City Chiefs for their Divisional Round matchup.

Everybody dialled this one up as a complete blowout, but Skyler Thompson had other ideas. Now, he may have put up a good fight, but his inexperience was on full display in the game's most crucial moment...

Buffalo forced the Dolphins into a fourth-and-one near late in the fourth quarter. And, as they had done many times before, Miami took too long to snap the ball, sending them back 5 yards with a delay-of-game penalty. The resulting fourth-and-six play saw Skylar Thompson's pass broken up by Kaiir Elam, and the game was over.

Miami did well considering they were without Tua Tagovailoa, but the Bills air-raid proved too much for the Fins defense to handle.

Stefon Diggs caught seven passes for 114 yards, and Gabe Davis had six-for-113 and a touchdown. Expect these two to feature heavily in the Bengals-Bills game this Sunday.

Now, we all knew the Vikings were regular-season frauds as the only 13-4 team in history to have a negative point differential. But I have to admit, I didn't know Daniel Jones was this good.

Jones passed for 301 yards and 2 touchdowns, while leading the run game with 78 rushing yards in his first career playoff game. I mean, this guy might have the worst receiver core in the NFL right now, but he's finding a way to put up three bills in the postseason.

Perhaps the biggest reason for that is just how terrifying Saquon Barkley can be. Minnesota may have done well to hold him to 53 yards on the ground, but he caught 5 passes to bring his total to 109 yards on the night. Plus, he still found the end zone twice despite their best efforts.

Saquon Barkley running over 324 pound DT Dalvin Tomlinson for the TD. He then lets him know about it.#TogetherBlue #TommysTakes pic.twitter.com/GgsBjQHO6E

The Giants are for real, but the Philadelphia Eagles will be a tough one to beat.

JK Dobbins is probably right when he says the Ravens "would have won if they had Lamar Jackson", and he's probably talking about one, very specific play...

Sure, Lamar probably would have juked his way around 6 defenders to score on this play, but Tyler Huntley drove down the field to put Baltimore in a great position to take a touchdown lead in the fourth quarter. It's still more than anyone expected of him.

This Ravens side managed to go toe-to-toe with Cincy... Joe Burrow & Co. will have to be much better if they want to beat Buffalo.

Regardless of the rocky performance, one thing that you can always rely on is the Burrow-Chase connection.

Dak Prescott deserves more respect. It's as simple as that.

And as one QB continues to cement his name in the record books, another may have just closed their final chapter.

Tom Brady's retirement has been in question for the last few seasons, and after this loss, it looks like it could really be the end.

Here's the video of how Tom Brady ended his press conference tonight: pic.twitter.com/bUHKJgSOmY