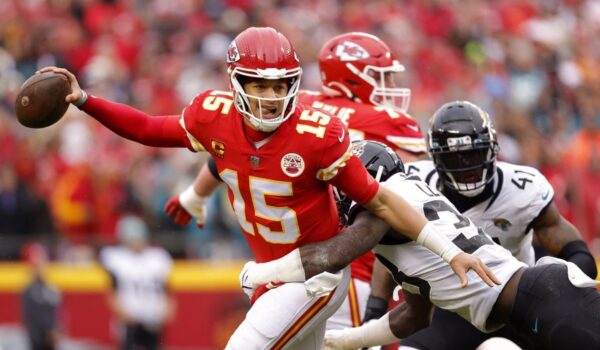 More Mahomes magic, record-breaking performances and a rookie looking like a vet, are the highlights of the 2023 Divisional Round, as we inch closer to Super Bowl LVII.

Patrick Mahomes powers through an ankle injury to take the Chiefs to their fifth straight AFC Championship game.

After missing most of the second quarter evaluating his right ankle, Mahomes came back to limp his way through hand offs and nickel-and-dime his way up the field.

No.15 finished 22 of 30 passing for 195 yards and two touchdowns, including 14 connections with Travis Kelce to land the third-most tight end receptions in postseason history. Kelce also found the end zone twice to add to his impressive stat line.

In Mahomes' absence, Chad Henne took over and completed a 98-yard touchdown-scoring drive to set a record for the longest playoff drive in franchise history. Not too shabby...

On the other hand, the Jags got off to a very slow start, with Trevor Lawrence throwing for just 90 yards in the first 3 quarters. But by the fourth, they managed to take it to a 3-point game.

A Chiefs touchdown response put Lawrence in a do or die position. He managed to take the Jags all the way to the 3-yard line and it looked almost certain they'd tie things up. And then this happened...

Fumbled inside the 5! @Chiefs ball!

Lawrence got the ball back, but threw a pick with 3 minutes remaining and it was all over.

A tough loss for Jacksonville but I expect to see them back in the postseason next year. Meanwhile, Mahomes looks like he could take KC all the way to the Super Bowl on just one leg...

Now, we all knew the Giants were the underdogs heading into this matchup, but the Eagles 38 points really solidifies them as the team to beat heading forward...

Jalen Hurts and company put on a show, while the defense held New York to just one touchdown. No.1 threw for 154 yards and 2 touchdowns, but Philly won this one on the ground - outrushing the Giants 268-to-118.

Kenneth Gainwell is the first #Eagles RB to have 100+ rushing yards in a post season game since 2006 pic.twitter.com/uQJjenoDsc

Meanwhile, Barkley was held to just 61 rushing yards - a mediocre performance by his standards. And Daniel Jones also had a tough day against the Eagles secondary, throwing for just 135 yards and an interception as his favourite targets were locked down. Darius Slayton and Isaiah Hodgins logged just one reception each, for a combined 7 yards through the air.

I fully expect to see Brian Daboll in the 2024 playoffs, but Jones needs some serious help in the wide-out position if they want to take things all the way.

The Bills were outplayed in all three phases by Cincy. They were manhandled on the line of scrimmage, out-thrown in the end zone and out-rushed all over the field.

The Bengals gained 30 first downs and didn't turn the ball over, as Joe Burrow threw 23 of 36 for 242 yards and two touchdowns, and Joe Mixon ran for 105 yards and a touchdown on 20 carries.

Ja'Marr Chase featured heavily in the passing game as usual and almost bagged himself two touchdowns on the night.

Meanwhile, Josh Allen completed 25 of 42 passes for 265 yards and an interception, as the Bills failed to gain any traction on the ground. Devin Singletary and James Cook combined for a total of 37 yards, leaving Allen to throw into the talented Bengals’ secondary.

Dawson Knox was his main target of the matchup, while Diggs and Davis were held to just 6 catches on the night.

The Bengals will face KC for the AFC title game this weekend, and the Bills will have to wait till next year where they'll undoubtedly get another shot at a playoff run.

If there was one thing you could rely on this season, it was Dak Prescott throwing an interception. And guess what? He only went and did it again. Twice.

In all the fairness, San Fran has the best defense in the NFL across the board, so coming within one score isn't terrible. But after all the praise sent Prescott's way last week, it was a shock to see Dallas completely shut down. I guess the Tampa Bay Buccaneers are a slightly easier opponent than the 49ers... Who knew?

If this game taught us anything about the Cowboys, it's that Dak needs more than just Ceedee Lamb to throw to. Lamb caught 10 passes for 117 yards, while the rest of his cohort were held to less than 28 yards each.

The line of scrimmage was dominated by red and gold jerseys, with Elliott and Pollard held to less than 50 combined yards as the 49ers shut down the Cowboys run game.

On the other hand, Brock Purdy was as reliable as always - throwing for 214 yards and maintaining his clean sheet of zero playoff interceptions. His favourite target of the night was George Kittle, who put on a show in San Francisco.

Shanahan split rushing reps between McCaffrey, Samuel, Mitchell and Juszczyk to log 113 yards on the ground and the '9ers only touchdown of the night.

With this win, the last round of the NFL Playoff schedule is set. San Fran will face the Eagles for the NFC Championship Game in the most anticipated matchup of the year. Sit tight folks!