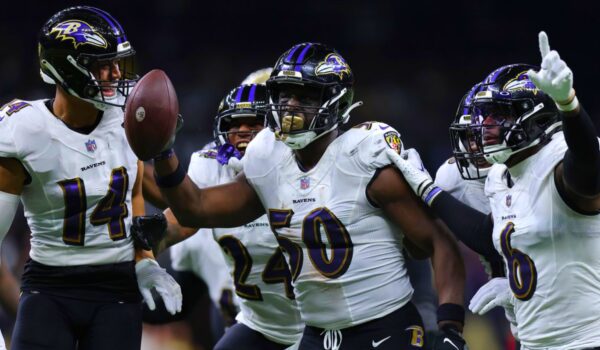 Kenyan Drake leads the ground game as Baltimore's defense shut down Andy Dalton to take the Ravens to a 27-13 win in New Orleans for Week 9's Monday Night Football.

Now, neither QB was very impressive in the passing game last night, but Lamar Jackson did what Andy Dalton couldn't - run.

Jackson threw just 12 completions for 133 yards but scrambled 11 times for 82 yards and banked plenty of 1st down conversions. Combining this with Kenyan Drake's 24 carries, the Ravens possessed the ball for more than 37 minutes of the game, giving the Saints very little time to make anything happen.

Despite his low yardage, Jackson did manage to find the end zone of one his 22 throws - bringing the rookie TE Isaiah Likely into the action to put Baltimore's first points on the board. It was pretty much smooth sailing after this.

More than Likely a touchdown 😅 @DaGorilla4

Andy Dalton was only a little better in the passing game, throwing 19-of-29 for 210 yards, but his only touchdown pass was the result of an awful miscommunication by the Ravens defense in the fourth quarter. There was really nothing special to see for either side's air raid.

I'm unsure when the quarterbacks will stop playing musical chairs in New Orleans, but with no consistency from Winston or Dalton, I still believe Taysom Hill is the answer.

Despite having one of the most talented backs in the league - Alvin Kamara - New Orleans amassed just 48 rushing yards on the night. This isn't necessarily a question of a poor offensive line or wide-receiver blocking, instead a question of scheme and play calling.

Now, it seems everyone in the league knows about the Saints' QB troubles, except the Saints... How they are giving Kamara just 9 carries a game is a complete mystery to me. After a 3 touchdown, 158 yards game against the Raiders last week - did Dennis Allen forget Kamara existed?

Perhaps the biggest difference maker in this matchup was the Ravens defense.

Baltimore's brick wall was bolstered by the debut of linebacker Roquan Smith, who was acquired in a trade with Chicago last week.

Roquan Smith makes a 3rd down stop in his @Ravens debut. 🙌

The activation of Tyus Bowser was also a welcome addition to the roster, after an Achilles injury had kept him out of all games so far this season.

As usual, Justin Houston dominated the line of scrimmage to land 2.5 sacks, 2 tackles for losses and an interception to top things off.

2.5 sacks and now an INT for Justin Houston. 😤@JHouston50 | #RavensFlock

Baltimore managed a total of 4 sacks, 5 TFLs and 7 QB hits to force 5 punts on the night and kept Andy Dalton out of the endzone for more than 55 minutes.

Now there wasn't much action for wide receivers in Caesar's Superdome on Monday night, but here are just a couple catches from players that continue to stand out this year.

First up, is rookie WR Chris Olave, who is making his case for ROTY as he leads the Saints receivers in terms of yards and is also fairly familiar with the end zone.

Now, here's a look at exactly what Alvin Kamara can do, when you actually give him a chance. This guy is seriously special. If Dennis Allen does figure out his quarterback situation sometime soon or at least scheme the run game around Karama, I'd expect a McCaffrey-type move in the near future. Plenty of teams would be lucky to have him.

A one-handed catch from @A_kamara6

The Baltimore Ravens progress to 6-3 and top the AFC North, while the New Orleans Saints fall to 3-6 and drop to 3rd below the Falcons in the NFC South.

Join me on Friday as I run through the Falcons-Panthers matchup. Will Mariota finally find his feet (or his arm)? Or will Baker Mayfield make a comeback in Carolina?