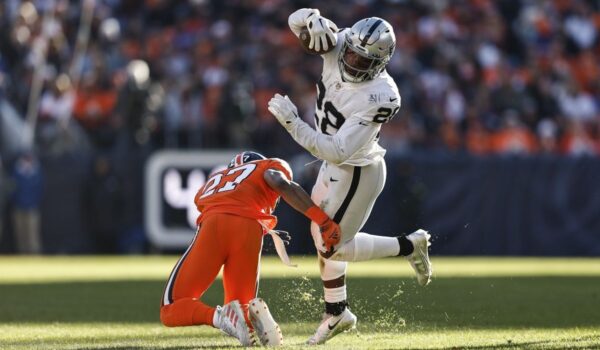 A flurry of Thanksgiving thrillers headline Week 12 of the 2022 NFL season, as questionable quarterbacks, kicking quandaries and record-breaking rushers steal the spotlight.

The Dolphins soar to 8-3 as Tua Tagovailoa continues to silence the naysayers. He now holds an 11-0 touchdowns-to-interception ratio and he's led the Fins to over 30 points in their five-game win streak. More than that, Miami are 8-0 when Tua starts and finishes the game... This is an MVP run if I've ever seen one. Buffalo won't win the AFC East without a fight.

Not to mention Tagovailoa has the best wide receiver duo in the league at his disposal with Tyreek Hill and Jalen Waddle. This trio is an unstoppable force against any defense, but Tua will get things done no matter who he has in the endzone.

It’s Tua Tagovailoa’s world and we’re all just living in it pic.twitter.com/xp458QtRuu

Turns out Joe Burrow can make it work without his two best offensive weapons - Joe Mixon and Ja'marr Chase.

Tee Higgins has played the biggest role in the Bengals air raid with Chase on the bench, and it was no different last night. Higgins caught 7 passes for 114 yards and a touchdown in the matchup.

Now, Cincy may have played a solid game, but this is more about the Titans being 1-4 against teams with winning records. Don't expect Tennessee to do much more than win their easy division this year.

And what's going to keep them atop the AFC South, if they're so mediocre? Derrick Henry, even if he fumbles at the one-yard line.

Treylon Burks scooped up Derrick Henry fumble for the TD 👀

Is it in Russel Wilson's contract somewhere that Nathaniel Hackett can't play his back-up QB? Honestly, Wilson is playing so badly that even the defense is sick of him... He should've lost his job in Week 6.

The Broncos are DONE with Russ pic.twitter.com/HcelVfEvsH

I never thought I'd see the day that Sam Darnold is a better QB than Russel Wilson, but here we are.

With an equally average offense, Darnold put up 23 on a solid Denver secondary, though D'Onta Foreman's 113 rushing yards could have something to say about that.

Regardless, this is a perfect touchdown pass, off his back foot with rushers in his face. Is Sam Darnold... good?

Well, the Chicago Bears really are nothing without Justin Fields. I mean, you can be pretty certain they'll lose either way, but at least their run game is reliable with Fields taking snaps.

On the other hand, Robert Saleh may have found his franchise QB hiding on the bench.

Mike White has just come out of nowhere to reinvent the New York Jets passing game - throwing for the most first-half passing yards in 16 years and leading a season-high 466 total yards in a game.

With Mike White everybody eats B! Elijah Moore welcome back!pic.twitter.com/FYYlJy1ir1

Washington is officially off to its best start since 2008 as Ron Rivera bags his 100th win as a head coach.

As usual, Taylor Heinicke led the charge with Terry McLaurin on the receiving end of most of his targets. But this week, Brian Robinson Jr logged his first 100-yard rushing game just three months after being shot. If this man isn't comeback player of the year, I don't know who is.

The Commanders are finding a winning formula, but it's all a little too late in a very tough NFC East.

As Cleveland add to the pile of Tom Brady’s most losses since 2009, I've started questioning why Deshaun Watson is even warming up.

Jacoby Brissett and Nick Chubb are more than capable of taking the Browns where they want to go, and this overtime win proved just that. Sure, they may need a couple years before they can edge out Joe Burrow or Lamar Jackson from the division, but it's certainly within reach. Especially with David Njoku and Amari Cooper reliably leading the air raid to take Cleveland to a walk-off touchdown.

This defensive performance for Baltimore leads me to question whether they can hang with the likes of Buffalo or Kansas in the playoffs. And the answer is no, they can't.

Before this historic win, Jacksonville was 0-183 when trailing by 7+ in the final minute of regulation. Now they can finally add a 1 to that win column.

Trevor Lawrence showed he may just have a spark that makes him worthy of that No.1 draft pick.

The Jags were efficient all game long, despite missing Travis Etienne for most of the matchup. But the real talking point is Lawrence leading a clinical game-winning drive in under two minutes with 0 timeouts. Oh, and he topped it all off with a 2-point conversion for the win...

Give him some time. This dude could be special.

This one could haunt Seattle for some time, but at least it highlighted exactly where their weakness lies... The run defense.

Josh Jacobs logged a ridiculous 303 yards against the Hawks - the most scrimmage yards in a game since 2015.

Now, Geno Smith may have put up 34 points, but if his side can't stop a Raiders roster that was shutout by the Saints, they won't last much longer in the race to post-season football.

Kyler Murray's return to the turf was overshadowed by a game-winning touchdown, as Austin Ekeler reached across the line to put 6 on the board with just 15 seconds left.

Justin Herbert dominated the Arizona defense all game - throwing for 274 yards and 3 touchdowns with 0 INTs. They may have been outrushed 181-65 by James Conner and Murray, but with both teams failing to put points on the board for 6 consecutive drives in the fourth quarter, it all came down to the wire and Ekeler got it done.

A tough loss for Arizona, but they were never making the playoffs. Meanwhile the Los Angeles Chargers could be making a late wild card run.

While most believe Garoppolo and McCaffrey could take San Fran all the way, I'm more impressed by their defense.

Admittedly, Dennis Allen has no idea what he's doing, but to hold any team to 0 is noteworthy in the NFL and this is the first time New Orleans have put nothing on the board since 2001.

This win is also the fourth straight game the 49ers have held oppositions to 0 points in the second half. In an open wide NFC, this team is looking great for another ring...

JAUAN JENNINGS WHAT A CATCH pic.twitter.com/i95np5iasG

And yet again, the Saints forgot that Alvin Kamara exists. 7 carries is a joke for one of the best running backs in the league.Get Dennis Allen out of New Orlean’s asap.

Now we all know LA are hopeless without Kupp and Stafford, but even their defense is having a tough time and it certainly wasn't made easier by the cheat code that is the Mahomes-Kelce connection.

These two just have a nose for the end zone, and I struggle to see anyone stopping them. Chiefs-49ers Super Bowl it is...

Also, Jalen Ramsey might be the most overrated DB in recent history.pic.twitter.com/GPwAotWh6G

As a Rams fan, it hurts to hear Kleiman's words, but maybe he's not wrong?

Jalen Hurts is who Justin Fields wants to be. They are both absolute machines in the run game, but only one of them is winning games.

Hurts is just the fourth player in the Super Bowl era to log 150 yards rushing and 150 passing in the same game. This man should be getting more MVP consideration.

And he wasn't alone in the ground game domination. Miles Sanders took 21 carries for 143 yards and 2 touchdowns, to take Philly's total to 363 rushing yards. The Green Bay defense may have some film to watch this week.

And as Aaron Rodgers picks up yet another knock, could Jordan Love become the new face of the Packers? The reigning MVP probably doesn't have much longer left, so let's not do a Russel Wilson and leave on a laughable note...