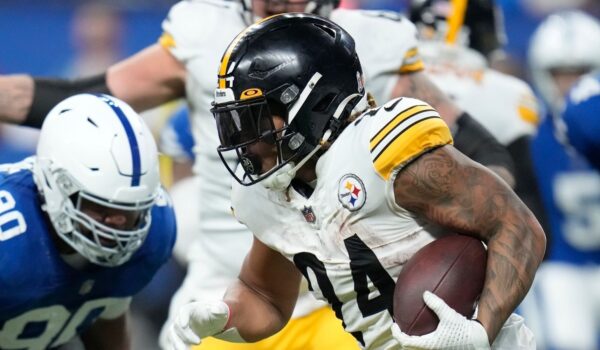 The Pittsburgh Steelers hold off a last-minute comeback bid to defeat the Indianapolis Colts on Monday Night Football at Lucas Oil Stadium.

If Mike Tomlin can somehow lead this team to a winning record, he may just deserve Coach of the Year...

After Najee Harris limped off the field in the first half, Tomlin had almost nothing to work with and decided to give Benny Snell Jr. his first carries of the season. And guess what? Snell took the ball 62 yards and scored the go-ahead touchdown with 9:55 left on the clock.

All that was left to do was sit back and watch the Steelers defense hold off Matt Ryan and run out the clock.

On the decision to bring the special teams regular into the huddle, Mike Tomlin said:

We go to any guy wearing a helmet. He was on the punt team coming in and sometimes you bet battlefield promoted.

Snell had 12 touches in Indy and produced his highest rushing total since December 2020.

After his impressive fourth quarter running, the Steelers found themselves on third-and-goal, with thousands of Terrible Towels waving in the stands. So, to top off his night, Snell found an open lane to the end zone and gave Pittsburgh a 5-point lead. Kenny Pickett then threw a dart to George Pickens in the end zone for the 2-point conversion to make it 24-17.

Needed it. Got it. @benny_snell

A comeback drive certainly seemed possible for the Colts, but some questionable head coaching and time management errors may have cost them the win (or at least the hope of overtime).

Matt Ryan drove the ball just outside the red zone but let an entire minute run off the clock in the span of just three plays in Steelers territory. Indy finally used its first timeout on fourth down with 30 seconds remaining...

Now, points may not have reached the scoreboard either way, but this will leave Jeff Saturday kicking himself as he falls to 1-2 in his interim position.

In all honesty, if Matt Ryan wasn’t such an old man, they would have had an easy first down here. Please do not start calling this guy 'Matty Wheels'...

On the other hand, Tomlin continues to find sparks from his limited offense.

Pittsburgh's backfield may not be as talented as Jonathan Taylor, but with a solid offensive line, they still found a way to make things work. Joining Benny Snell Jr on the Steelers’ stat sheet is Najee Harris who logged 35 yards and a touchdown before taking a knock that left him unable to continue.

And Steelers rookies are still leading the passing game, as Pickett threw for 174 yards, finding fellow newbie George Pickens for 56 yards in the win. Pickens has been making plays all season, this is nothing new...

Speaking of rookies - Jelani Woods stole the spotlight in the Colts passing game, as Michael Pittman Jr took a back seat for the first time (though he still found the end zone).

2022 3rd round pick, TE Jelani Woods, caught 8 passes for 98 yards in the match up, as Matt Ryan's favourite target on the night.

Taylor totaled 86 yards and a touchdown on 20 carries in the loss. If this man can stay healthy, expect him to be Indy's saving grace if they make a last-ditch attempt at a wild card spot. But I'm not hopeful with plays like this...

A red zone fumble recovery for the @Steelers!

In a 7-point game, something could also be said for the field goal production, as Pittsburgh's Matthew Wright hit 4/4 field goal attempts to put up 9 of his 10 points on the night. Including this one that snuck its way between the uprights.

On the other hand, a missed kick just before the break, put Indy in a 13-point deficit heading into the locker room. They may have come back to take a 1-point lead, but it was all too late after a 3-point first half.

Jeff Saturday certainly has a tough job on his hands, but Mike Tomlin's is no easier...

Let's face it, neither side is on our radar for the playoffs. Maybe one of them makes a wild card spot. Maybe. But with so much quality in both halves of the league, you can be sure they won't get any further.

So, a loss on the Colts record takes them to 4-7-1, and Pittsburgh progress to 4-7 to look just a little less average.

While we wait for Thursday Night Football to roll around, why not get involved with the World Cup Contests? They're completely free to enter and you can win cash prizes and free bets just from guessing the outcome of the games...