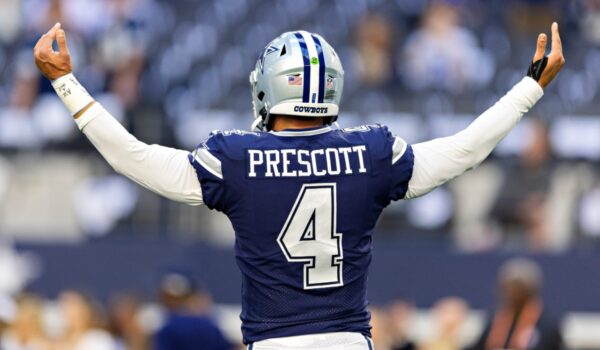 Patterson set an all-time NFL record for kick return touchdowns as he logged his 9th trip to the end zone when his team desperately needed it.

THE MOST KICKOFF RETURN TDS IN NFL HISTORY FOR CORDARRELLE PATTERSON
pic.twitter.com/QoT1o6iiI6

Justin Fields led the Bears in rushing yards yet again, but like I've been saying for weeks... IT DOESN'T WIN GAMES! I wonder how loud I need to shout for Matt Eberflus to hear me.

In their current 4-loss streak, Fields has averaged just 148 passing yards per game, while he averaged 117 on the ground. There's a good reason Chicago are 3-8, and it's pretty clear why...

Philadelphia remain atop the NFC thanks to their first double-digit fourth-quarter comeback since 2010.

Now a 1-point win over Indy is not something to be proud of, especially when you're making a run for the Super Bowl, but a win is a win. Still, the Birds have a lot to work on if they stand a chance in tougher matchups.

Either that, or they'll rely on Hurts to get the job done all by himself...

On the bright side for Indy, Jonathan Taylor looks to be back in full health, finding the end zone and racking up the yards. Expect better things from the Colts in the coming weeks.

Ladies and gents, we have a new contender for worst game of the season. This snooze-fest was tied 3-3 from the start of the second quarter, until just 5 seconds were left on the clock.

So how did the Jets lose to New England for the 14th straight time? Well, having more punts (10) than completed passes (9) was one part of it... But crucially, they let the Pats final return travel 84-yards for a near walk-off touchdown.

It’s the Jets. They’ll always be the Jets. pic.twitter.com/0swlH1KyUB

And it sounds like Zach Wilson doesn't think that putting 3-points on the board is letting your team down. There are a few reasons why Wilson isn't worthy of a starting spot and a lack of responsibility could be an easy addition to the list...

Zach Wilson does not think he let the Jets defense down today pic.twitter.com/cwlLLDfz3Z

The Commanders defense finally lived up to expectations, as they kept Houston to 190 yards of total offense.

Kendall Fuller grabbed his first pick-6 from one of Davis Mills' two interceptions, while rookie sensation Dameon Pierce was held to just 8 yards from 10 carries. Yes, 8...

Meanwhile, Taylor Heinicke continued his campaign as Washington's new starting QB. He may have had a solid game, but this win is on the defense.

Despite being bottom of the AFC East, the Commanders still have a winning record at 6-5 and could bag a wild card spot if they continue playing this way.

Los Angeles lost Matthew Stafford midway through this matchup, but let's be honest, they would have lost either way...

Despite Cooper Kupp being sidelined with an ankle injury, the Rams had one of their best offensive performances of the season. Sadly, their efforts were wasted as the defense allowed Andy Dalton to look like a Pro Bowl QB in their fourth straight loss.

Jalen Ramsey being beaten deep is starting to become a recurring theme in LA's matchups.

I don't care what the score line says, or even that Dalton threw 3 touchdowns. The Saints are not a good team. They still don't appreciate the talent of Alvin Kamara, and Taysom Hill is a better QB than Dalton every day of the week.

The Bills reinstate their run for the Super Bowl after back-to-back 3-point losses to the Jets and Vikings.

Josh Allen finds his feet again after a flurry of turnovers and the Bills count on their ground game to be the difference maker in this matchup.

Devin Singletary led the way as Buffalo put up 171 rushing yards on the Browns defense. This was a little too easy...

Meanwhile, Cleveland had just one outlet on their offense - Amari Cooper.

Nick Chubb and Kareem Hunt failed to provide their usual explosiveness (minus a few screen passes) as they logged just 51 total rushing yards. So, Jacoby Brisset turned to Cooper to put points on the board.

The Browns No.2 caught 8 passes for 119 yards and 2 touchdowns but stood alone as the only bright spot in a struggling offense this week. I think it's game over for Cleveland...

Carolina must be getting bored of musical chairs by now. Just put PJ Walker in, cut everybody else and thank me later...

In their last 51 games, the Panthers are 4-3 with Walker at QB. This loss in Baltimore makes them 9-36 with all other quarterbacks. It's really not that complicated...

Baker Mayfield threw 196 yards and 2 interceptions to round out Carolina's final 2 drives of the game. I know he was a No.1 overall pick, but let's just give this guy the back-up spot he's earned.

Tune in on FOX! pic.twitter.com/cCYNkEp9mc

The Ravens were pretty shocking too.

Lamar Jackson could only muster a couple of field goal drives until early in the fourth quarter, when Carolina lost a fumble on the 31-yard line. Jackson ended up rushing 1-yard for 6 to put up the only touchdown of the night.

It's hard to say whether Daniel Jones or the Giants defense lost this game... Either way, they'll never be the most disappointing team in New York.

Jones threw 2 interceptions in a rocky passing game, while Saquon Barkley failed to get going on the ground. The reliable Giants running had a very disappointing day as he managed just 22 yards from 15 carries.

Jamaal Williams found the end zone three times and was joined by D'Andre Swift and Justin Jackson to log 150 rushing yards and 4 touchdowns on the night.

Detroit may be playing well, but I'm glad I can say that this win wasn't down to Jared Goff.

While Russ 'The Bust' Wilson had his first noticeably good performance of the year, it still wasn't enough to beat a very average Raiders side. Perhaps if they gave Melvin Gordon more than 8 carries, they'd find more success... 'Disappointing Denver' haven't changed since Week 1.

On the other hand, Derrick Carr finally picked up his struggling offense, relying on one of the best wide receivers in the league to get things done - Devante Adams.

Adams caught 7 passes for 141 yards and 2 touchdowns, including this wide-open grab for the walk-off score.

Honestly, I didn't want to see either side win, they're both as boring as each other. I even got excited by the prospect of a draw when overtime rolled around. Oh well...

This game was billed as the most competitive matchup of the week, but it seems only one team actually turned up to play. Maybe there's a reason the Vikings were being ignored despite their 7-1 record.

If Dallas can continue moving the ball out of the backfield like this, while stopping the likes of Dalvin Cook, I have no doubt we'll see them make a deep run in the playoffs.

After this loss, it's honestly hard to predict what will happen to Minnesota in the rest of the season.

Despite TJ Watt completely dominating the line, the Bengals land a win in Pittsburgh to progress to 6-4 on the year.

Joe Burrow is finding a way to get things done despite losing Ja'Marr Chase and Joe Mixon. Samaje Perine stepped in to score 3 touchdowns in the win, while Tee Higgins lit up the Steelers secondary.

My money's on a prime-time showdown between Cincy and Baltimore with the AFC North title on the line.

The loss of Tyreek Hill definitely took a hit to the Chiefs deep-shot offense, but Isaiah Pacheco becoming their first 100-yard rusher in a season and a half, signals the balance Andy Reid has found in the depleted offense.

Plus, Travis Kelce is certainly doing his part to make up for Patrick Mahomes' lack of options.

Kelce joined the list of hat-trick touchdown scorers this week - taking three passes to the end zone and logging 115 yards on the night.

This comeback win in Los Angeles, means Mahomes hasn't lost a single division game on the road. Ever. The Chiefs are scary good.

Week 11 has just one game left, as the 49ers head to Arizona for Monday Night Football. So, join me tomorrow as I take you through the Cardinals loss to San Francisco.