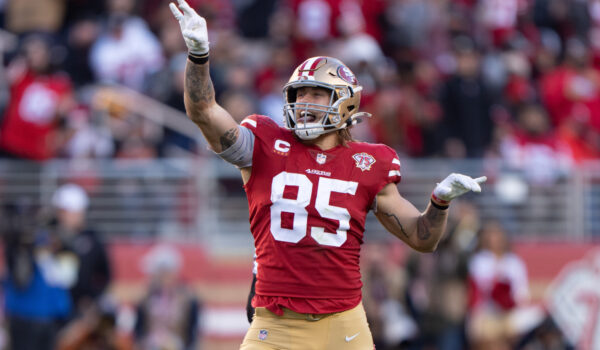 San Fran now sits atop the NFC West, while the Cardinals fall to third place at 4-7.

San Francisco had no trouble moving the ball both on the ground and through the air, but with Colt McCoy and Trace McSorley out-passing Jimmy G 277-228, you could say that the run game had more of an impact in this matchup.

Elijah Mitchell led the way with 9 carries for 59 yards while Christian McCaffrey and Deebo Samuel added 76 more to the total, but both players saw more screen passes and check-downs than hand-offs, as well as this piece of trickery.

DEEBO IS ONE OF ONE. @19problemz

In the end, the 49ers out-rushed Arizona 159-67 to be the difference maker in this matchup, but it wasn't what put points on the board for San Francisco... The end zone was found through Jimmy G's air raid offense, as he found an array of targets across the field.

Last week, George Kittle saw just one reception on 2 attempts from Garoppolo and followed up the game with a statement about how he'd like to see more of the ball. I mean, it's tough when he's such a good run blocker and you have McCaffrey in the backfield, but this is what can happen when you throw Kittle the ball...

George Kittle logged 84 yards and 2 touchdowns from 4 receptions on the night, while C-Mac and Samuel hauled in 7 targets each for a collective total 124 yards through the air.

Brandon Aiyuk got involved in the action once again, as he also found the end zone on 2 separate occasions to give Jimmy G a total of 4 touchdown passes.

Garoppolo to Aiyuk for the second time tonight!

Colt McCoy may have grabbed a win over the struggling Rams last week, but it's clear that Arizona may have troubles ahead if Kyler Murray remains on the sideline.

McCoy may have racked up the yards but failed to produce points in the red zone. James Conner scored the only touchdown for the Cardinals last night, as he bulldozed his way in from the 2-yard line.

Conner played well all things considered, but with Nick Bosa dominating the line of scrimmage, there wasn't any room for big gains on the ground.

Deandre Hopkins was the most reliable outlet for McCoy as he logged 91 yards from 9 receptions, but Greg Dortch led the passing game with an explosive play that took his total just over the century mark. The Cardinals are definitely capable of big plays without Murray, but they're few and far between.

A Colt McCoy interception was the tipping point that took him off the field as the game moved out of reach. Trace McSorley replaced him in the huddle and completed 6/10 for 59 yards, but topped things off by throwing a pick of his own in the San Francisco end zone...

The 49ers defense shone in this Monday Night Football matchup.

Despite allowing almost 300 yards through the air, San Francisco halted James Conner at the line of scrimmage - logging 9 tackles for a loss when Arizona attempted a hand-off which forced Kliff Kingsbury to throw the ball. As McCoy stepped back to look downfield, Bosa and company logged 3 sacks and 9 QB hits to disrupt the passing game.

#49ers Nick Bosa with sack 10.5 to close out the half! pic.twitter.com/jZ3boght3z

Meanwhile, the Cardinals failed to take down Garoppolo all night long - with quick releases and an impressive O-line performance, Jimmy G was safe to throw dimes as he pleased.

Arizona needs JJ Watt to step up more than ever if they stand a chance at overtaking Seattle in the West.

So, San Francisco still have a winning formula. They may not be the Super Bowl team they once were, but I wouldn't place any bets against the 49ers if they can stay healthy and use their ridiculously talented offense the way it should be.

C-Mac is an unstoppable force, but teams will always overcompensate for such a stacked backfield. So, get Kittle the ball and watch the magic happen.

On the other hand, I can't see Arizona making a playoff run if Magic Murray doesn't return sometime soon. The NFC West is still up for grabs (except for the Rams), so I'm holding onto my money for now, but I wouldn't be surprised if the 49ers soar ahead in the next few weeks.

And that wraps up Week 11 of the 2022 NFL season! Time is flying by as we approach our triple-matchup for Thursday Night Football in Week 12. It's Thanksgiving and what does that mean? Football. And plenty of it.