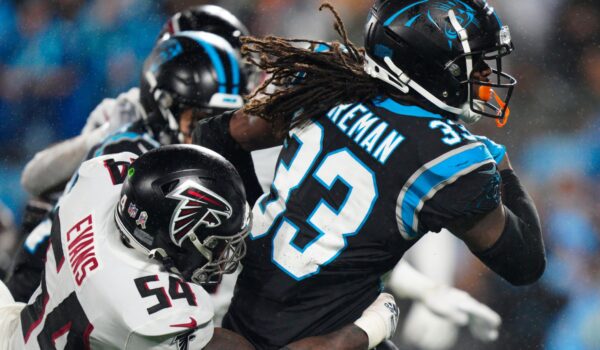 After suffering an embarrassing loss to the Atlanta Falcons two weeks ago, the Panthers sought redemption in Carolina for their Week 10 Thursday Night Football game - and they found it.

A Game on the Ground

Missing two game-winning field goals in their last matchup must have made an impact on the Panthers, inspiring them to stick to what they know - the run game - even without McCaffrey.

Now, let's be honest, nobody was expecting PJ Walker to come out the gate throwing dimes and he proved us right. Instead, D'Onta Foreman took the spotlight with 31 carries for 130 yards and a touchdown, dominating the Falcons all night long.

What an answer. @D33_foreman takes it home and pays the stands a visit. #KeepPounding#ATLvsCAR on Prime Video
Also available on NFL+ https://t.co/xiiiBjvT39 pic.twitter.com/1jeIoiYiTp

And surprise, surprise... Marcus Mariota led Atlanta on the ground yet again - scrambling 3 times for 43 yards. The rest of the workload was split between an array of Falcons running backs, with Caleb Huntley, Avery Williams, Tyler Allgeier and Cordarrelle Patterson all combining for 138 total rushing yards.

Despite some talented backers, it seems the Atlanta Falcons can't quite escape Mariota's desire to run the ball himself. He may be a great athlete and it may be entertaining to watch, but this doesn't win games...

Mariota is slippery, rain or no rain.#ATLvsCAR on Prime Video
Also available on NFL+ https://t.co/xiiiBjO2hh pic.twitter.com/qguElto3If

The Panthers amassed a total of 232 rushing yards on the night to make the ground game the deciding factor in this showdown. The rain didn't help either QB complete passes, but I still don’t think we’d have seen anything spectacular if the sun was shining.

Carolina may have finished with a good score line, but the Falcons had plenty of chances to take the lead. It was at these moments; the Panthers defense stepped in and took control - although it could be said that Mariota's questionable decision making had a big role to play.

First up, is this interception by Jaycee Horn to set up the Panthers 13-0 lead. Why Mariota is doing this on 2nd & 10, I will never know.

Ball up for grabs... and @jayceehorn_10 is under it. PICK! #KeepPounding#ATLvsCAR on Prime Video
Also available on NFL+ https://t.co/xiiiBjvT39 pic.twitter.com/tU4tKtGQFl

That may seem like a terrible throw but we're just getting started...

No wonder the Falcons are struggling to get win - their QB is doing this. The last-ditch attempt was obviously intercepted, but luckily Mariota was called down by contact.

Marcus Mariota with one of the most "F*** IT" throws I've ever seen 💀pic.twitter.com/uhxIrTEAEL

Regardless of how questionably Mariota was playing, the game-winning moment came down to Carolina's defensive lineman Marquis Haynes Sr, who bagged the second of his 2 sacks on a Falcons 4th quarter 4th down. The Panthers landed 5 sacks on the night.

Atlanta on the other hand, didn't do very much defensively - with 0 turnovers and just one sack, they put nothing on the highlight reel for Week 10.

Mariota may have done most of the work with his legs (as usual), but he still managed to connect downfield on a few occasions. The Falcons QB threw for 186 yards and 2 touchdowns to prove he may still have enough arm talent to make things happen. But I'm still not convinced...

One score went to Drake London, who has been Mariota's favourite target so far this year, while the other end zone connection went to KhaDarel Hodge who was found wide open in broken coverage.

Meanwhile, PJ Walker struggled even more in the passing game - with just 10 completions for 108 yards - but it's not so much of an issue when you can rely on your running back for yards.

Even Walker's throwing touchdowns went down as rushing scores... Much to the demise of his stats, this throw went backwards:

Eddy Pineiro must have learned his lesson from Week 8 as he sailed 4/4 field goals through the uprights, putting up 13 points in the Panthers revenge win with an extra point to boot.

He may have been more reliable in this matchup with Atlanta, but Carolina's kicker was still testing his luck from time to time...

So, the Carolina Panthers kick off Week 10 of the 2022 NFL season with a win - although they are still 3-7 on the year. And the Falcons fall to 4-6, trailing Tampa Bay in the NFC South.

Join me on Monday where I'll be breaking down the good, the bad and the ugly from all of Sunday's matchups.