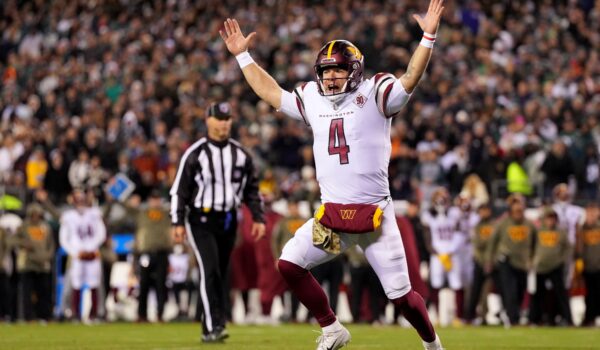 Last week I said that Heinicke's magic run was over. Yesterday I said the Eagles would win this game by double digits. Now, I may have hit an 80/1 bet at the weekend and a 116/1 the week before, so my punditry isn't quite dead in the water, but this call was definitely one of my worst...

Week 10's Monday Night Football matchup saw the Washington Commanders shut down the 8-0 Philadelphia Eagles to put the first loss on their record. Ron Rivera now joins Don Coryell as the only two coaches in the Super Bowl era with multiple wins against teams 8-0 or better.

The Eagles may have been 8-0 but I think we were all a little blind to their sloppiness. Facing a well-rounded side revealed all the gaps in Nick Sirianni's scheme, as Hurts and company failed to hit the game-breaking plays that have defined their season.

We'll get to Heinicke magic in a bit, but what really decided this MNF matchup was the run game.

Washington handed the ball off 49 times, while Philly had just 20 attempts on the ground. The result was the Commanders out-rushing the Birds 152-to-94.

Brian Robinson Jr led the way with 26 touches for 86 yards, while Antonio Gibson served as a reliable back up with 44 yards to his name. Both RBs found the endzone for Washington's only two offensive touchdowns of the night.

Brian Robinson would not be denied! @BrianR_4 | #HTTC

Meanwhile the Eagles struggled to find their feet.

Miles Sanders logged just 54 yards on 12 carries, but with his longest gain being 8 yards, it was clear that Philly wouldn't be finding points in the ground game. (No, Hurts sneaking in from the 1 doesn't count).

It may not have been the point-producing unit Heinicke may have hoped, but the passing game was just as reliable as their run scheme, and it only took one receiver.

Heinicke hit 17 of 29 for 211 yards on the night. He may have thrown a pick to CJ Gardner Johnson in an attempt to reach No.17, but his connection with Terry McLaurin on every other target, more than made up for it. The QB's favourite wide-out clocked 128 yards from 8 receptions.

'Scary Terry' was doing this all night long...

Kickers may not be part of the offense, but I think Joey Slye deserves a shoutout as the Commanders' most prolific point-scorer of the night.

Slye hit 4/4 field goals and 2/2 extra points to put up 14 points in the road-victory for Washington. 2 of his long shots came from 55-yards and 58-yards to make a key difference to the score line. Talk about automatic...

Joey Slye from 58 yards to end the half!

The biggest issue with the Eagles is what they fail to do when their explosive plays don't pay off.

Hurts hit some big deep shots but paid the price on two separate occasions, as big gains became turnovers. Washington schemed perfectly for a team that relies on one-on-one catches and game-breaking touchdowns.

First up, came this pick from Darrick Forrest as Jalen Hurts launched a ball deep to try and extend Philly's lead. Hurts was looking for his usual favourite AJ Brown who amassed just 7 yards in the matchup. A disappointing stat line for one of the best receivers in the league. Not much he could do in this coverage though...

Then, trailing at halftime for the first time this season, Hurts had just one more big play left to try and turn things around.

WR Quez Watkins made the grab on a 51-yard throw late in the fourth quarter with the Birds trailing 26-21. Watkins hit the ground and took off running, only for Benjamin St-Juste to force a fumble and give Washington possession.

.@Benj_Juice forces the fumble and the @Commanders recover!

The Eagles struggled with turnovers all night - losing 3 fumbles in total. The Washington defense dominated all game, minus a few moments of weakness where Devonta Smith and Dallas Goedert found the endzone.

They were the only Philly receivers to put points on the scoreboard last night - 2 touchdowns were never going to be enough with the number of possessions lost.

On top of the Forrest interception and the St-Just fumble, Washington forced 2 more turnovers in the matchup, one of which gave them a touchdown to end the game (as Philly played hot-potato on the final play).

The most crucial play of the game though, may be this 3rd-down sack from Montez Sweat which forced a punt to give Washington the ball with 2:40 left and a 5-point lead.

Montez Sweat with the sack on third down 😤 @_sweat9

Now, they may have dominated the Eagles explosive offense and deservingly won the game, but the fact that this wasn't a facemask flag is astonishing... The officials know they can review plays, right?

So that wraps up Week 10 of the 2022 NFL season. Philadelphia looked nothing like the team we thought they were, and with their loss, Miami’s 17-0 run in 1972 remains the only undefeated run in NFL history.

The divisional upset left Brandon Graham kneeling in the middle Lincoln Financial Field as the rest of the team headed to the locker room. The prospect of an undefeated season wiped away would have understandably hit home for the 12-year vet.

All eyes look to Week 11 as the Commanders face the Houston Texans this Sunday. Washington has now won 4 of their last 5 games... Could they be turning their season round to make a last-ditch attempt in the NFC East? They'd need the Giants and Eagles to have some serious troubles in the coming weeks if they want even the slightest shot at a Wild Card.

And could the Eagles season be turning on its head? We all thought their string of mediocre matchups would prove to be no issue for Jalen Hurts and company. But with the Colts surprise win over the Chiefs in Week 3, I wonder what they have in store for Philly this weekend...

Join me on Friday as I recap the Titans-Packers game for Thursday Night Football.